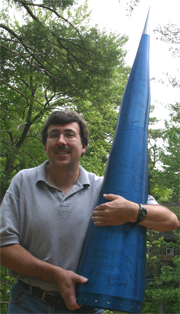 Eric proudly displays a prized collectible of the new commercial aerospace industry: the actual nosecone of the rocket that flew the cremated remains of “Scotty” James Doohan and L. Gordon “Gordo” Cooper into space on April 28, 2007. Visible on the nosecone are the signatures of James Doohan’s Star Trek colleagues who signed it prior to the launch, wishing him well on his celestial journey.

The author, Eric Knight, is an inventor, entrepreneur, writer, futurist, and rocketry pioneer.  He is the president of Remarkable Technologies, Inc., a company he founded in 1994.

Eric is a popular speaker, nationwide. He is also a frequent media guest, with numerous appearances on national and international media outlets including CNN, Discovery Channel, BBC, Late Show with David Letterman, etc.

Eric was one of the team leaders (the Avionics Manager) of CSXT — the Civilian Space eXploration Team — an organization conceived of and managed by the legendary “rocketman” Ky Michaelson.  The improbable mission:  to build and launch the first civilian rocket into space.

On May 17, 2004, after years of agonizing rocket crashes and catastrophes — some quite spectacular — the team accomplished its remarkable goal.

After the historic achievement, Eric continued upward and onward to a new space endeavor:  a commercial venture that (among other accomplishments) launched the cremated remains of Star Trek icon “Scotty” James Doohan and aerospace pioneer and NASA astronaut L. Gordon “Gordo” Cooper into space on April 28, 2007. It was the first space launch to occur from New Mexico’s Spaceport America.

For Eric’s general business bio, including information about his aerospace endeavors, click here.

"Space visionaries craft vision for the longer-term future of space exploration at Boston University Conference."
Here's a link to the book-referenced press report of this amazing conference.